Increasing Attendance One Student at a Time 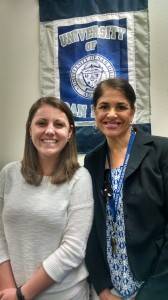 Allyson Wilkins: I was born and raised in Rocklin, California, a suburb of Sacramento. I earned my B.A. in Psychology as well as a minor in Child Development at California State University, Chico. I am currently working towards my Master of Arts in Counseling, with a specialization in School Counseling, and upon graduation, I will have earned my Pupil Personnel Services credential.
Tonya Edrington: I have been a School Counselor at Midland Elementary School for the past 3 years. I have earned a Master’s degree at the University of San Diego where I studied School Counseling and acquired my Pupil Personnel Services (PPS) credential as well as my Licensed Professional Clinical Counselor (LPCC) license.

In implementing four lunchtime lessons on various Attendance related topics such as attendance review, ways to stay healthy, and ways to ensure daily attendance, I was able provide the fourth-grade students with information about the importance of attending school each day as well as some helpful ways that they can enable themselves to plan strategies to pursue school attendance. After these activities with a particular class, attendance in this class was improved from 94% to 99%. As compared to a one-classroom guidance lesson, a series of lunchtime lessons seems more effective in increasing school attendance. The procedure used in this project could be adopted and implemented by future interns as well as teachers and counselors who face similar attendance problems.

This research was conducted at the fieldwork site where Allyson Wilkins was interning under the supervision of Tonya Edrington. The setting was a fourth-grade class in an elementary school located in Southern California, that serves students in Grades K-5. It has the unique title of being the oldest school in the district (founded in 1925. Approximately 35% of the students qualify for free/reduced meals and Title I support. The racial/ethnic breakdowns of the student population are: 3% African-American, 7% Asian, 4% Filipino, 32% Hispanic, 50% Caucasian, and 3% other. English Learners comprise roughly 35% of the student population. There are more than 20 different languages represented on this campus, with Spanish being the most predominant after English. The majority of Midland students demonstrated proficiency on the California Standards Test in both Math and English/Language Arts in the 2014-2015 school year and a positive trend was seen among students who performed at the Far Below Basic and Below Basic levels, with progress toward the Basic and Proficient levels of understanding. This project was implemented as part of an effort to increase not only school attendance but student performance as a consequence of improved school attendance.

Significance and Purpose of the Study

Student absenteeism is associated with poor academic performance (Weismuller, Grasska, Alexander, White, & Kramer, 2007). Attendance and punctuality are crucial within the school system in order to assure that students are receiving all necessary tools, information, and resources to succeed.  As attendance has been a growing problem, there have been many research studies examining the impact of interventions. An intervention research assessed the effects of a 5-month program involving monitoring attendance, participation in sport, and providing a class on moral character, and found the program successful in reducing absenteeism (Marvul, 2012). An action research project tackled absenteeism through discussing “the importance of school and the students.” It was found that students were motivated to come to school by incentives, enjoyed check-ins because they made them feel special and proud, and enjoyed the program because of its positive effects on their academics simply by their increased presence (Cole, 2011). Informed by these studies, this action research was designed with the goal of increasing student attendance by implementing lessons to inform students about the importance of school attendance

Participants. Students of a 4th grade class (12 girls and 20 boys) at an Elementary School in California participated in this action research. In surveying the attendance records from August 19, 2015 (first day of the 2015-2016 academic school year) through December 18, 2015 (last day before the holiday break), this specific class had the lowest attendance percentage in the school with 94%.

Measures. Exit cards and weekly self-attendance sheets were utilized. The exit cards were used to get an accurate understanding of what the students learned and were taking away from the day’s lesson. Weekly self-attendance sheets were used for students to record when they were present and when they were absent and reasons. Students brought this sheet each week to the lessons for group discussion.

Procedure. Four weeks of lunchtime lessons were held on Tuesdays in March and April 2016, after a classroom guidance lesson. Lunchtime lessons were conducted to give students information on various topics related to attendance. An incentive was provided each week that included pizza, popsicles, nachos, and popcorn.

In the first cycle of the action research, Ms. Wilkins conducted a classroom lesson and then monitored participants on their attendance for four weeks. In the second cycle, lunchtime lessons were held where Ms. Wilkins focused on a certain aspect related to attendance each week (i.e., attendance review, ways to stay healthy, ways to ensure daily attendance). The four lessons were as follows.

The first lesson began with a treat (lunch) and then an overview of attendance basics. During this time the students were quizzed on how many days they believe they have missed and/or been tardy. Next, they were given their personal attendance record where they can compare and discuss specific areas of improvement. Exit cards were distributed at the end of this lesson. Weekly self-attendance sheets were distributed during the first lesson and students brought them each following week to check in how they were doing and to compare with their actual attendance records.

The second lesson began with a treat (lunch). Then the group went over weekly self-report attendance sheets. Ms. Wilkins provided students with strategies on how to stay healthy and avoid illness at school. Exit cards were distributed at the end of this lesson.

The third lesson began with the treat as well. After this, the group went over the weekly self-report attendance sheets. Then, the group discussed how much information students missed when they were absent just one day. Exit cards were distributed at the end of this lesson.

The fourth and final lesson began with a treat and then included weekly self-report attendance sheets, followed by a discussion session regarding what counts as valid and invalid reasons for staying home from school based on district standards. Exit cards were distributed at the end of this final lesson. The data on all exit cards (i.e., student comments in response to open-ended questions) and self-attendance sheets were analyzed.

Some examples of student remarks in the exit cards in answering “Today I learned..” included: “that staying home for no reason is not okay”; “Going on a vacation and not coming to school is an absence”; “Wash my hands for 30 sec”; “Go to school and wait for summer or break”; and “I learned that if I was absent it would count on my permanent record and how many days I missed.” Of the 32 participants, 24 students attended in Lesson 1, 19 in Lesson 2, 16 in Lesson 3, and 26 in Lesson 4. In implementing four lunchtime lessons on various Attendance related topics, I was able to provide students with information about the importance of attending school each day as well as some helpful ways that they can ensure this. With the rate of student participation in the four lunch time lessons of 78%, attendance in this class was improved from 94% to 99%. Further, there was an 82% decrease in days excused and an 88% decrease in days unexcused. We consider that the procedure used in this project could be adopted and implemented by future interns as well as teachers and counselors who face similar attendance problems.

This project was the first significant research I have ever independently conducted. A language barrier caused an issue in communicating with parents in the classroom, as well as translating the flyers to provide parents with information about the action research in Spanish. Lastly, this specific classroom was extremely focused on academics and therefore finding time to squeeze in attendance lessons implemented by the counseling intern was challenging. Some recommendations for future research include: (a) engaging something more hands-on in Cycle one such as weekly check-ins as necessary; (b) lengthening Cycle two for individual sessions as well as adding extra lessons with additional topics; and (c) including parent involvement in the project.  Starting action research with a parent night to inform them of the research as well as gathering information as to what they need to know in relation to attendance would be helpful. Also recommended is communicating with parents after each lesson about what was discussed, so they would be able to generate similar conversations with their children at home.

To cite this work, please use the following citation:

Wilkins, A., & Edrington, T. (2016, May 16). Increasing attendance one student at a time. Social Publishers Foundation.  https://www.socialpublishersfoundation.org/knowledge_base/increasing-attendance-one-student-at-a-time/