Sexual Harassment of Domestic Workers at their Workplaces 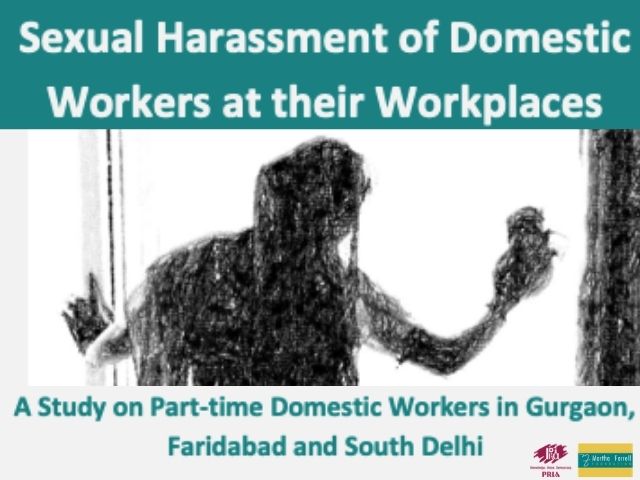 Established in 1982, PRIA (Participatory Research in Asia) is a global centre for participatory research and training based in New Delhi. PRIA’s work is focused on empowerment of the excluded through capacity building, knowledge building and policy advocacy. Over almost four decades, PRIA has promoted ‘participation as empowerment’, capacity building of community organisations, and people’s participation in governance. Initiatives are undertaken in the overall perspective of ‘making democracy work for all’ – in the political system; democratic culture in families, communities, and society; and participatory democracy with active citizenship.

Domestic work in India is a large sector of employment, especially for women. According to International Labour Office (ILO), there are currently 52 million people employed as domestic workers worldwide. Out of these, 83% are women. Although they make up one of the world’s most long-standing and widespread workforces, domestic workers are frequently overworked, underpaid, and unprotected.

PRIA, along with the Martha Farrell Foundation (MFF), has been working with domestic workers in Gurgaon, Faridabad and South Delhi to collectivize them and build their capacities around the issue of sexual harassment at the workplace. The work has also been focusing on strengthening redressal mechanisms and preventive measures, through working closely with District Administration, unions and civil society organizations to mainstream the issues of sexual harassment of domestic workers.

To bring visibility to this issue, PRIA and MFF have been gathering qualitative and quantitative evidence to capture the extent of this problem; how domestic workers deal with it, their awareness about redressal mechanisms and the readiness of redressal mechanisms to effectively address this issue. As a part of this study, in June, 2018, MFF and PRIA conducted a rapid survey with 291 domestic workers in Gurgaon, Faridabad and South Delhi. This report brings out the findings of the survey and some experiences of workplace sexual harassment of domestic workers.

“I used to work in a house which had a huge family. I thought that it would be safe to work there. But whenever there was no one around, the old grandfather of the family would find a pretext to get closer to me and touch me. I knew that even if I told someone, no one would believe me.” – Amina (name changed), a domestic worker in Gurgaon.

Harsh working conditions leave domestic workers vulnerable to sexual harassment at their workplaces. Stories like that of Amina are often everyday realities of domestic workers’ work lives. Already disadvantaged by their gender, class and caste status, domestic workers are often at the receiving end of sexual abuse. This is further aggravated because of their migrant status. Migrants lack the necessary community support in a situation of duress and the clout and resources for social action. They are often illiterate and unaware of the law, and the impending threat of loss of employment and the stigma associated deters them from reporting violence. Therefore, the isolated and highly privatized nature of their workplaces and their isolation as migrant women workers puts them at high risk of sexual abuse.

Considering the unorganised nature of domestic work, it is important to understand what constitutes a ‘workplace’ for domestic workers. As per the Sexual Harassment of Women at Workplace Act 2013, a workplace is defined as “any place visited by the employee arising out of or during the course of employment, including transportation provided by the employer for undertaking such a journey” (Ministry of Women and Child Development, 2015). The definition also extends to the workplaces of informal sector women workers to include a dwelling place or house and workplaces, such as residential complexes and houses, of unorganized sector women workers.

PRIA and the Martha Farrell Foundation have been working with domestic workers in districts of Gurgaon and Faridabad in Haryana and districts of South Delhi for the past two years. Their work attempts to create safe and dignified workplaces for domestic workers by collectivizing and sensitizing them about sexual harassment at workplaces. It also builds their capacities so that they can lobby and advocate with the state and other stakeholders to strengthen redressal mechanisms and preventive measures to eliminate workplace sexual harassment.

The work also focusses on strengthening the functioning of Local Committees (LCs) in the aforementioned three districts to respond effectively to the grievances of domestic workers. In addition, other stakeholders like the Resident Welfare Associations, placement agencies and other intermediaries like civil society groups, media, etc. are also being engaged and sensitized on the issue. A number of workshops and interface events are being organized to enhance their understanding of the situation and issues related to sexual harassment in informal workplaces.

The aim now is to build a robust coalition of domestic workers based on the experience gained and lessons harvested from our work so far. This coalition will also include other civil society organizations, actors from the state, media and academia. These efforts will be scaled up to have an impact on national level policy advocacy and reforms. Also, these experiences will be documented in a manner so that critical knowledge can be built around the issue of sexual harassment of domestic workers and interventions can be replicated in other parts of the country to ensure sustainability of action.

With its commitment towards building essential and critical knowledge around the issue of sexual harassment of domestic workers, MFF and PRIA have been gathering data for the past year through various qualitative and quantitative methods. This study has been documenting the experiences of domestic workers, how they are affected by sexual harassment at the workplace and its impact on their lives. It has also been documenting the response of the LCs and other stakeholders (like RWAs and placement agencies) in the three districts to analyze the efficacy of redressal and preventive mechanisms and the gaps and loopholes in the implementation of the SHW Act 2013.

While quantitative data were gathered through surveys, qualitative data are being gathered through participatory research methods to document the safety or unsafety of domestic workers at their workplaces. Participatory safety assessments (PSAs) are also being conducted with the domestic workers in the three districts to map their workplaces (or the ‘world of their work’) and how they experience safety or unsafety in their multiple workplaces. This evidence, which is generated by the domestic workers themselves, is then shared by them with the LCs or other stakeholders to demand appropriate action to ensure safe and dignified workplaces for themselves. In the process, domestic workers co-create this knowledge and also use it to effectively lobby and advocate for their safety and welfare.

While conducting the survey, the survey team also recorded reactions and testimonies of the domestic workers. Some of them have been shared below along with the quantitative results from the survey.

The findings of the rapid survey clearly establish that domestic workers are affected by sexual harassment at the workplace on a regular basis and lack the necessary support and redressal mechanisms to deal with it. It also shows that advocacy with LCs, district administrations, state governments and RWAs is urgently needed, so that they can be galvanized into action and perform their roles and responsibilities as per the SHW Act 2013.

The anecdotes shared by the domestic workers also bring out how they lack support in their own communities and families when they are faced with this issue. While governance institutions have to be strengthened, community sensitization and mobilization will also be imperative to ensure that domestic workers have support from every sphere and class, caste and gender barriers can be overcome to generate collective action for change.