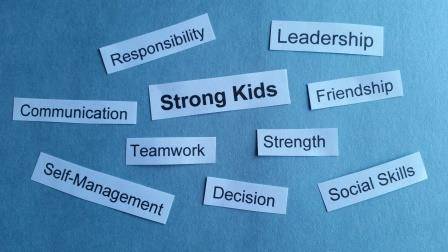 This action research project explored the impact of a Social-Emotional Learning curriculum, Strong Kids, on promoting positive prosocial behaviors within a group of male students in a sixth grade Mild Moderate Special Day Class (SDC). The goal of the project was to assist students in identifying their strengths and learning how to build and maintain positive social relationships. The Strong Kids program is designed to teach social and emotional skills, promote resilience, and strengthen assets of children and adolescents, preschool through twelfth grade. For this project, lessons from the Strong Kids curriculum for grades sixth through eighth were given twice per week for two and a half weeks. Each student’s overall social-emotional functioning was measured by the BASC-2 Behavioral and Emotional Screening System completed by the SDC teacher and Emotional Quotient Inventory: Youth Version (EQ-i:YV) completed by the students. Research outcomes did not show significant findings, as improvements were not shown consistently across students. I plan on continuing this project and allowing for more time for the intervention to be conducted in order to gather additional data.

The action research was conducted at a middle school in which I am currently doing my second year field work. It is located in one of the older, more established neighborhoods, and has served students for over fifty years. It is a relatively small school consisting of approximately 612 students. The demographics of the school are similar to the city in which it is located with approximately 52% White/Caucasian, 5% Asian-American, 3% African-American, and 6% two or more races. In addition, about 33 percent of the students are considered socioeconomically disadvantaged, 11 percent are English Language Learners and 12 percent have some type of disability.

The goal of this intervention was to teach middle-school students how to appropriately express their emotions, solve interpersonal problems, and deal with stress.  It was expected that by learning these skills, the students would be better able to solve conflicts with peers and express their frustrations with each other more effectively.  In addition, these skills would help them become more confident in themselves and help promote prosocial behaviors in the classroom.  I also hoped that the results of this project would open up a conversation about implementing Social-Emotional Learning programs for students at Sun Valley Middle School.

The intervention for the project consisted of implementing a Social-Emotional Learning curriculum called Strong Kids for a small group of two Special Day Class (SDC) male students.  Strong Kids is a program designed to teach social and emotional skills, promote resilience, and strengthen assets of children and adolescents.  The program is developmentally appropriate and based on the individual students’ grade level.  The Strong Start component consists of lessons for children in preschool and kindergarten through second grade, Strong Kids for students third through fifth and sixth through eighth, and Strong Teens for students ninth through twelfth grade.  Each component is designed to be used in both the classroom and small group settings.

Initially, the group was to meet for approximately 45 minutes once per week for six weeks, and utilize the Strong Kids curriculum for grades sixth through eighth.  The curriculum consists of twelve lessons that each take approximately 45 minutes to complete.  Since the group was intended to only last for six weeks, only the lessons that pertained to the goal of the group were planned to be implemented.  During the first meeting, introductions were made and the group was introduced to the Strong Kids curriculum.  In the following sessions, lessons such as “Dealing with Anger,” “Understanding Other People’s Emotions,” “Solving People Problems,” and “Letting Go of Stress” were implemented.  During the last session, the lesson entitled “Behavior Change: Setting Goals and Staying Active” was planned to be implemented and the group was wrapped up.  Unfortunately, due to time constraints and difficulties obtaining parent consent in a timely manner, the group was modified to be implemented twice per week for two and a half weeks.  All lessons that were planned were implemented with the exception of “Behavior Change: Setting Goals and Staying Active.”

Data for this project was collected through standardized rating scales.  The SDC teacher, who had the students in her sixth period class, was asked to complete the BASC-2 Behavioral and Emotional Screening System (BESS) for each student.  The BASC-2 BESS was a short rating scale that measured behavioral and emotional strengths and weaknesses of children and adolescents kindergarten through high school.  It consisted of 27 questions and took about 5 to 10 minutes to complete.  To measure how much progress was made from participating in the group, the teacher was asked to complete this rating scale before and after the students participated in the group.  The students were also asked to complete a short rating scale called the Emotional Quotient Inventory: Youth Version (EQ-i:YV).  The EQ-i:YV was a strengths based self-report measure used to measure strengths and areas for development in children and adolescents social-emotional functioning.  It consisted of 30 questions and took approximately 10 minutes to complete.  This rating scale was also completed before and after the group was held to assess the amount of progress the students felt they made from participating in the group. The data was analyzed by looking at the pre and post-intervention scores obtained from the teacher ratings on the BASC-2 and the student’s self-ratings on the EQ-i:YV.  They were presented in a graph in order to see the amount of progress each student made after participating in the group (see slide presentation).

The results from the research project were different from what was anticipated, as the social-emotional learning did not occur consistently across students.  First, information I collected from stakeholders prior to the project made it appear that the students were having difficulties with social and emotional skills.  However, results from the BASC-2 BESS completed by the teacher before the intervention indicated the students were within the normal range for social and emotional functioning.  After participation in the group, teacher ratings indicated there was little to no improvement made by each of the students.  For example, after comparing the pre and post-intervention T-Scores, it was found that Student 1’s score increased by 1 and Student 2’s remained the same.  Results from the EQ-i:YV completed by the students were similar.  Student 1 rated himself overall in the Average range (Standard Score = 107) on the pre-intervention scale, whereas Student 2 rated himself within the High range (Standard Score = 111).  On the post-intervention scale, Student 1 rated himself overall in the High range (Standard Score = 114) and Student 2 rated himself in the Average range (Standard Score=104).  Based on teacher and self-report rating scales, it did appear that Student 1 made improvements in his overall social and emotional functioning.  Student 2, on the other hand, did not appear to make any improvements in his overall skills.  Perhaps given more time the results from the project would have been more significant.